Well, I haven't been on here in a bit, so I thought I'd wish everyone a happy holiday season and post some new pics of the kids. As you can see they're getting big. Probably due to the popcorn and cereal that Darrius told his pre-school class we had for dinner on Thanksgiving. If we eat that grand on a big holiday, imagine what we're having on normal days! Of course, those of us that know and love Darrius are not surprised he told his class this, as he is also the little twink that told his teachers I beat his sister. Jaylani is doing excellent in school (despite the frequent beatings she's apparently getting) and gets the equivalent of straight A's. (They don't get letter grades in 3rd grade.) Hopefully she'll keep loving school as much as she does, and some of it will rub off on her brother. Keep your fingers crossed! Anyway, hope you all have a great holiday season! 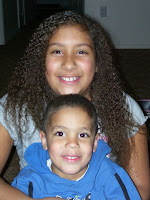 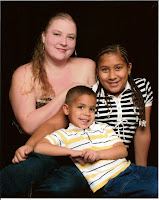